BBC Rip Off Britain LIVE returns for a second year to The One Show studios in Central London, and once again I will be on-hand to answer more viewers’ consumer technology questions. Last year I spoke about contactless payments and passwords – this year it’s online gaming.

In the first show of the week-long series I’m due to talk about how online gamers are increasingly being targeted by ‘bounty hunters’ eager to hijack their account to gain access to their games, achievements or even their credit card details (bear in mind that the show is live so anything could happen instead…!).

In a plot that quickly begins to sound like a video game in its own right, the fraudsters use a variety of tactics to trick high-value gamers into revealing their login details so that their gaming accounts and virtual identities can be stolen and sold on for real cash.

Earlier in the series Rip Off Britain spoke with two disgruntled gamers whose Sony Playstation accounts had apparently been hijacked, but other gaming platforms can be hot targets too. With over 4,500 games and 125 million gamers, PC gaming platform Steam is one of the largest gaming networks around and, inevitably, it is also a target for scammers.

Despite a well-publicised security flaw identified in July 2015 Steam generally has a sound reputation for security of its users’ data. However, this hasn’t stopped gamers from having their accounts compromised — in fact, the majority of fraud appears to be as a result of phishing and social engineering rather than any hacks of either Steam’s or its users’s systems. 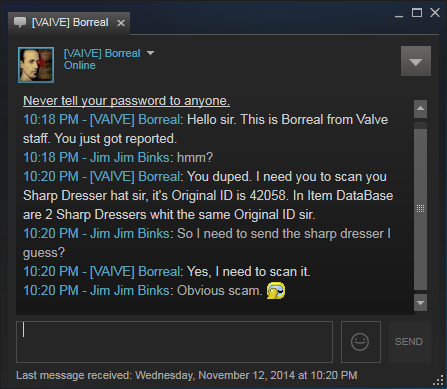 Posts like this on gamebanana go into some detail on the social engineering methods that scammers have successfully used to hijack accounts. It describes how scammers have used in-game instant messaging to pose as Steam administrators warning (ironically) that their account has been hacked and needs to be regenerated.

The post may be several years old, but sadly the same tactics are still in use. More recent scams may attempt to install malware onto your PC or into your browser, but they all involve convincing you to click a link or reveal your account information. Here’s another incredibly useful post that shows some scams in action, along with how to spot a Steam scam.

Vigilance, it seems, is the best defence, along with basic awareness of the tactics employed by the scammers.

But if you find yourself a victim of Steam account jacking then help is at hand – in fact, Steam has a special form to help recover stolen and hijacked accounts:

However, Valve bosses do acknowledge that Steam’s current customer service is far from good enough, with support tickets seemingly going unanswered or ignored, but it is working hard to remedy it.

Questions will inevitably be asked whether Valve, the parent company behind Steam, is active enough in trying to prevent this kind of fraud. In response Steam is currently introducing a two-factor authentication mechanism, Steam Guard Mobile Authenticator, which in theory should reduce some fraud.

This entry was posted by David on October 19, 2015 at 08:30, and is filed under Television, Uncategorized. Follow any responses to this post through RSS 2.0.Both comments and pings are currently closed.